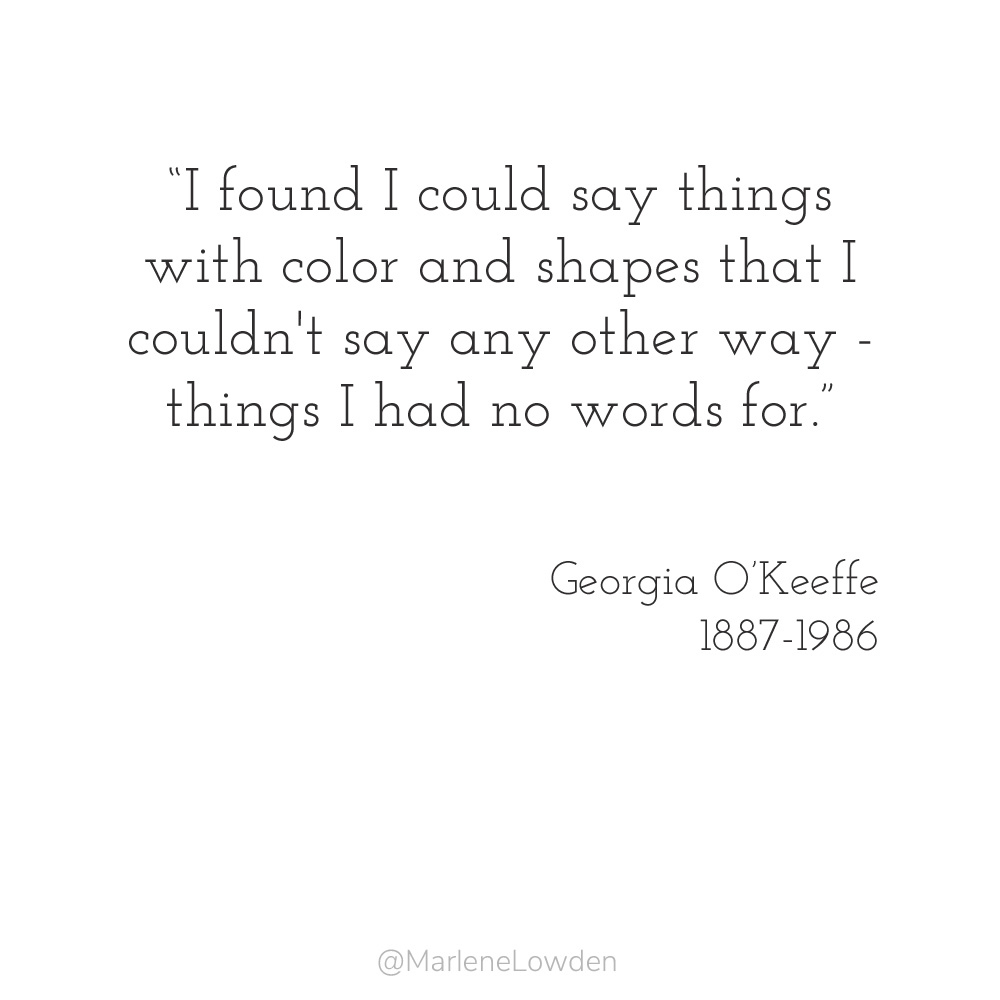 In 1946, Georgia O’Keeffe was the first woman artist to have a retrospective at the Museum of Modern Art (MoMA).

Luckily, she was raised in a family that valued education for girls and studied at the Art Institute of Chicago in 1905.  She supported herself as a teacher.

Around 1915, O’Keeffe read two influential works,  Dow’s theory of self-exploration through art and Kandinsky’s essay “On the Spiritual in Art.”  She began to experiment with natural forms, such as ferns, clouds and waves, and she started a small series of charcoal drawings that simplified these forms into abstracted combinations of shapes and lines.

She sent a collection of these drawings to a friend in New York asking that they not be shared.  Her friend showed the drawings to photographer and owner of Gallery 291, Alfred Stieglitz.  He showed the work in his gallery without O’Keeffe’s knowledge.

They were very favourably received and she decided to move to New York. Her friendship with Stieglitz later led to their marriage.  However, it seems that her first love was with the landscape of Southwestern U.S.  For most of their marriage she lived and worked in New Mexico and he in New York and showing her work.

For many years the 300 or so portrait and nude photos of O’Keeffe that Stieglitz took were more well known than the painter’s own work but by the late 1920s, O’Keeffe was recognized as one of the most significant American artists of the time.  Her art began to command high prices.

She was not part of any “school” or style.  She dressed almost exclusively in black.

“I decided I was a very stupid fool not to at least paint as I wanted to and say what I wanted to when I painted as that seemed to be the only thing I could do that didn’t concern anybody but myself – that was nobody’s business but my own.”

Producing a substantial body of work over seven decades, she sought to capture the emotion and power of objects through abstracting the natural world.  A prolific artist, she produced more than 2000 works over the course of her career. The Georgia O’Keeffe Museum in Santa Fe is the first museum in the U.S. dedicated to a female artist, and its research centre sponsors fellowships for scholars of modern American art.