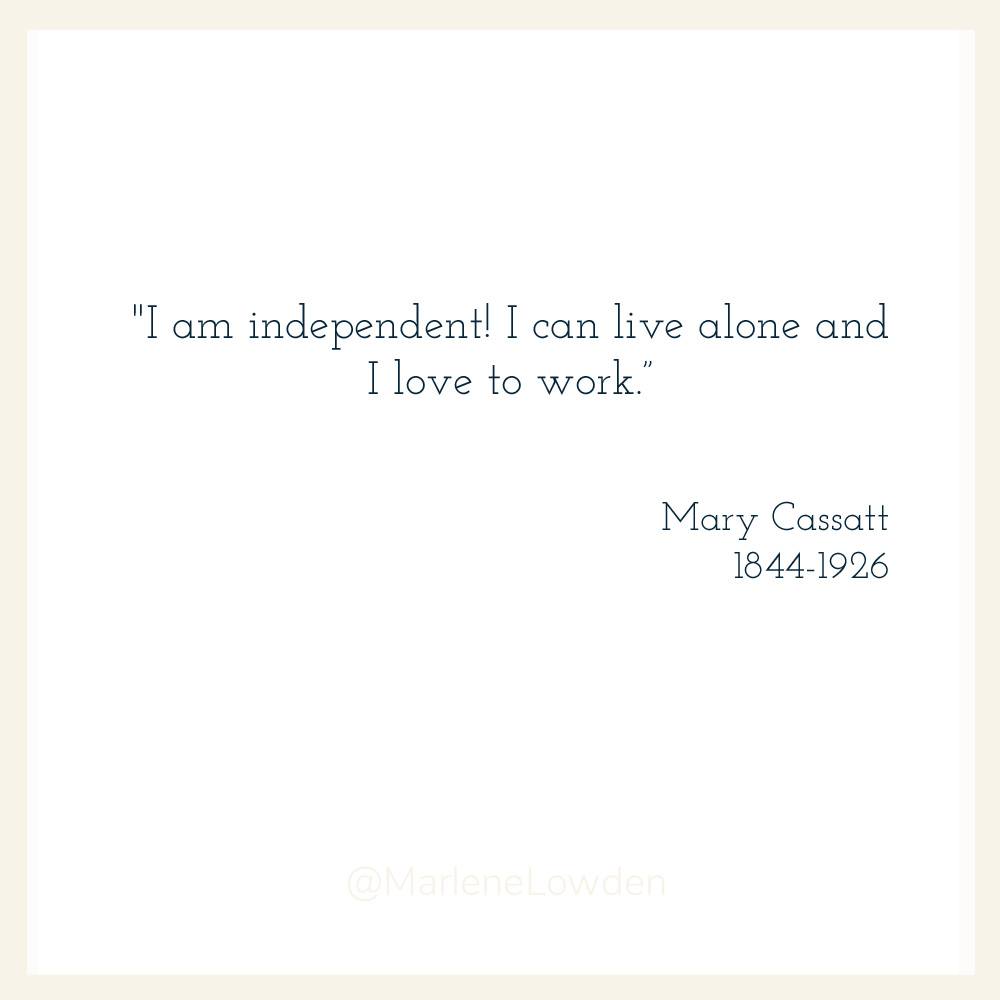 Blind Contour Drawing #11 – “Young Women Plucking the Fruits of Knowledge or Science”  Women’s Building of the 1893 World’s Columbian Exposition in Chicago – portion of a panel, since been destroyed – Mary Cassatt

Mary Stevenson Cassatt was an American painter and printmaker.

She was born in Allegheny City, Pennsylvania in a wealthy family and grew up in a household that viewed travel as essential to education. She lived for five years in Europe and began studying painting at the Pennsylvania Academy of the Fine Arts at the age of fifteen.

Her family had many concerns including exposure to feminist ideas and the bohemian lifestyles of some of the male students. She found her education to be moving too slowly and restrictive. Female students could not use live models (until somewhat later) and the principal training was primarily drawing from casts.

Cassatt decided to end her studies without a degree with the support of her mother and at the objections of her father. In 1866, she moved to Paris, with her mother and family friends acting as chaperones.  Clearly skilled, she was accepted to study with Jean-Leon Gerome, a highly regarded teacher known for his hyper-realistic technique and his depiction of exotic subjects.

At this time, the French art scene was in a process of change, as radical artists such as Courbet and Manet tried to break away from accepted Academic tradition, the Impressionists were in their formative years.

In the summer of 1870, she returned to the states. Her father continued to resist her chosen career and paid for her basic needs, but not her art supplies. Cassatt considered giving up art, as she was determined to make an independent living.

However within months of her return to Europe in the autumn of 1871, her painting “Two Women Throwing Flowers During Carnival,” was well received in the Salon of 1872 and was purchased.

She began to attract notice in Parma and was supported and encouraged by the art community there, “All Parma is talking of Miss Cassatt and her picture, and everyone is anxious to know her”.

Cassatt admired Edgar Degas, whose pastels had made a powerful impression on her when she happened upon them in a window in 1875. “I used to go and flatten my nose against that window and absorb all I could of his art,” she later recalled. “It changed my life. I saw art then as I wanted to see it.”

She was invited by Degas to show paintings for the next Impressionist show. The Impressionist exhibit of 1879 was the most successful to date.

Her style had gained a new spontaneity during the two years. Previously a studio-bound artist, she had adopted the practice of carrying a sketchbook with her to record the scenes she saw, out-of-doors and in her daily life.

She became extremely proficient in the use of pastels, eventually creating many of her most important works in this medium. Degas also introduced her to copper engraving, of which he was a recognized master, which strengthened her control of line.

In recognition of her contributions to the arts, France awarded her the Legion d’honneur in 1904.

Diagnosed with diabetes, rheumatism, neuralgia, and cataracts in 1911, she did not slow down, but after 1914 she was forced to stop painting as she became almost blind. Nonetheless, she took up the cause of women’s suffrage, and in 1915, she showed eighteen works in an exhibition supporting the movement.

Under the influence of Degas and many more, Cassatt revised her technique, composition, and use of colour and light, manifesting her admiration for the works of the French avant garde, she again made a specialty of the mother and child theme, which she treated with warmth and naturalness in paintings, pastels, and prints.