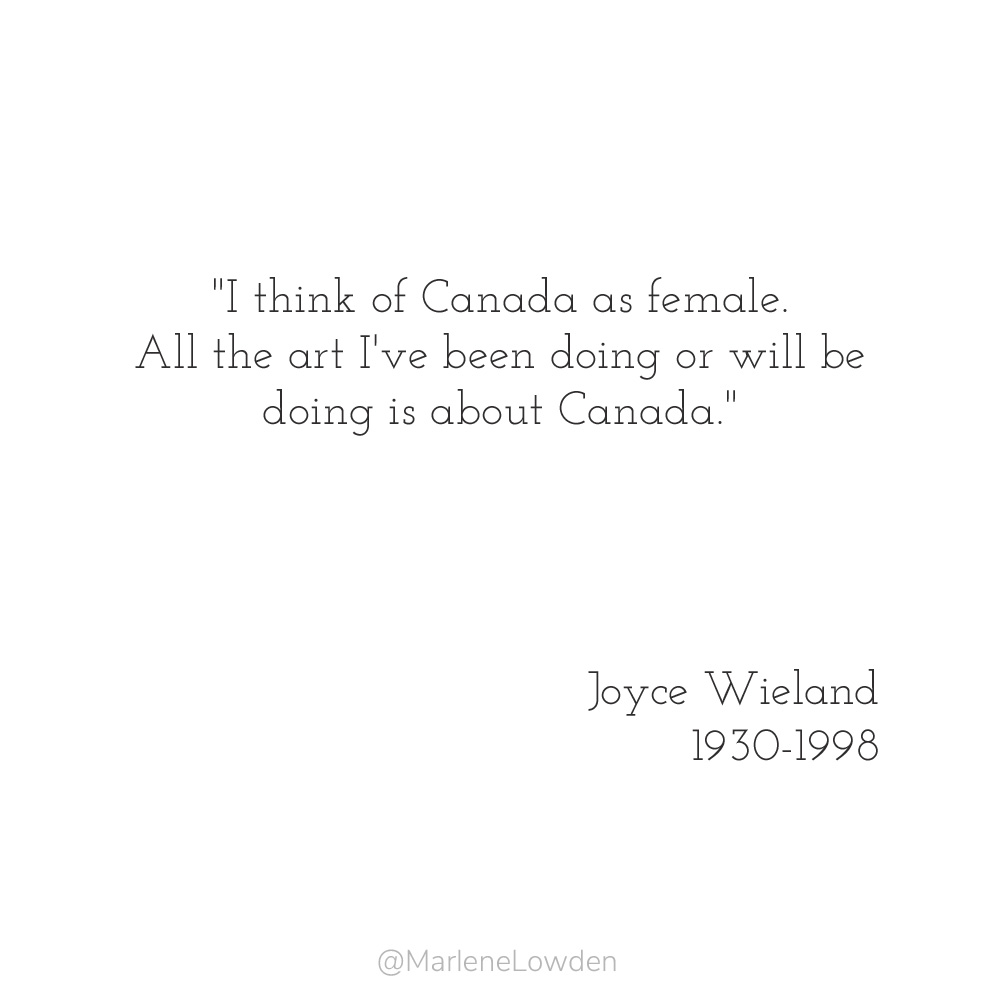 Joyce Wieland was born in Toronto in 1930. She was the youngest child of emigrants from Britain. Wieland and her 2 older brothers struggled to survive after both of their parents died when she was still in grade school. Despite being poverty stricken, she was able to study fashion design at the Central Technical high school in Toronto. It was there that she met working artists like Doris McCarthy. McCarthy was an independent spirit and committed to her art practice. She became an important mentor for Wieland.

After graduating in 1948, Wieland worked as a graphic designer. She met artist, Michael Snow at a graphics firm in Toronto. They married in 1956 and had a 20 year relationship.

Before she married, she moved into her own apartment studio, which at the time was not the common for young women. She lived alongside other artists and became part of the city’s growing boho scene. Her independent nature led her to travel and she was able to visit Europe a few times in her twenties. She began to achieve some success with her paintings in the late 1950’s and had her first solo show in Toronto in 1960.

Between 1962 and 1971, Wieland and Snow lived in New York. Feeling connected to the city’s counter culture vibe, she continued to paint but also explored other mediums. New York was teeming with pop art and conceptual art, and artists were responding to the political and cultural issues of the time, including the war in Vietnam, feminism, and environmentalism.

Wieland had learned filmmaking and animation techniques while working in commercial design, so she began to create films. In a short period of time, she was screening her work alongside her American colleagues. Her work was well received due to their political edge and wit.  In 1968 the Museum of Modern Art in New York presented Five Films by Joyce Wieland. Her films are known internationally.

Wieland had a healthy relationship with sex and was passionate about feminism. Much of her artwork explore these themes. Besides film and paint, she also started to work with fabric. She intentionally used fabric to express her political ideas because traditionally it had been used by women. She created quilts and mixed media pieces that challenged the notions of what is art and what is craft, what is masculine and what is feminine. She was a leader in bringing these materials and mediums into the fine art world.

On Canada Day, July 1st, 1971 the National Gallery of Canada presented her solo exhibition, True Patriot Love. It was the first time the Gallery had given a solo show to a living Canadian female artist. At that time she returned to Toronto to live and work. By the 1980’s she was focused on painting and in 1987 the Art Gallery of Ontario held a retrospective of her work.

Wieland maintained a studio practice in Toronto until her health began to decline. She was cared for by a group of female friends until her death on June 27, 1998 from Alzheimer’s disease.