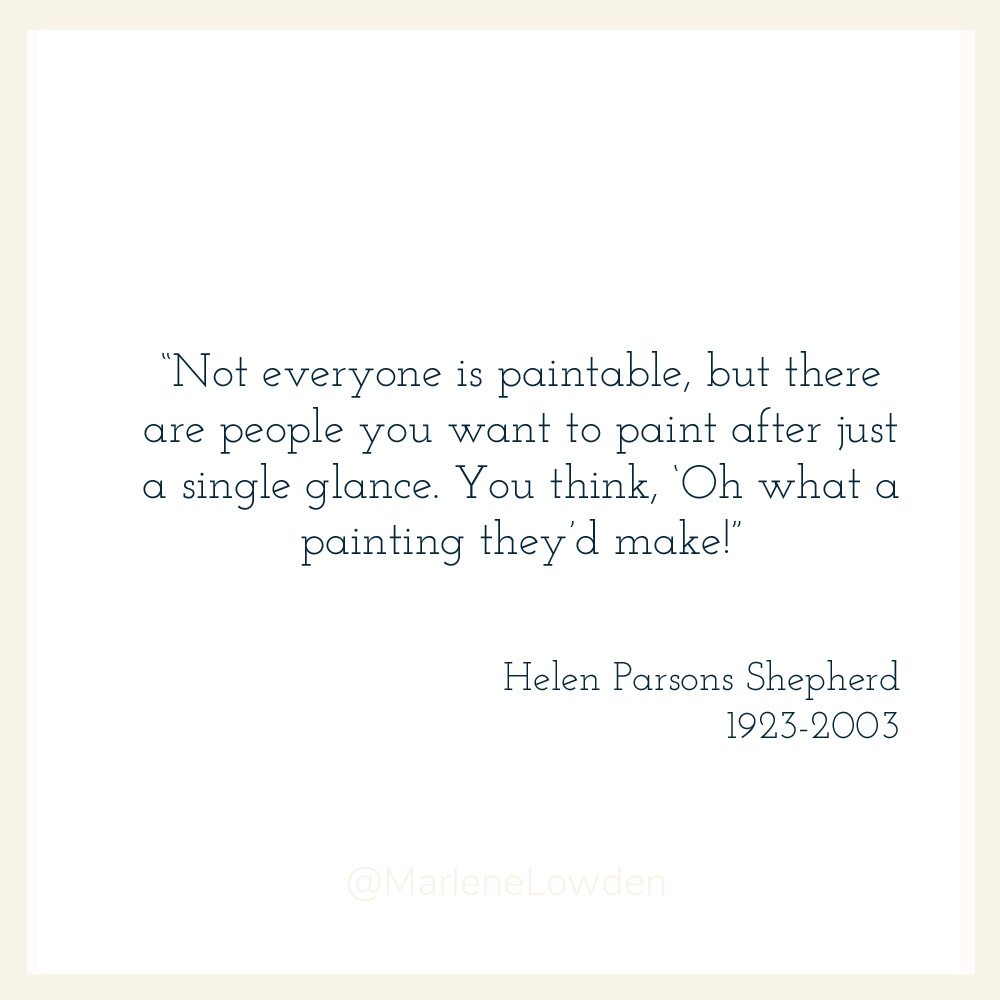 In her early days, contemporaries found Helen Parsons Shepherd’s desire to be an artist objectionable not because she was a woman, but because she was a Newfoundlander. Her parents regarded creative activities as hobbies; her father, a poet in his spare time, worked professionally as a lawyer. Before Parsons Shepherd helped transform Newfoundland and Labrador’s cultural landscape, St. John’s had no art scene to speak of—not a single commercial gallery or art school.

Discouraged, therefore, from studying the one interest she had been passionate about since childhood, Parsons Shepherd drifted along various career paths, attending one year at Memorial University College, then studying for four months at a nursing school in Montreal, then clerking for a year in her father’s office. Finally, perceiving the aimlessness of these pursuits, her father relented and, in 1944, paid the tuition for his daughter to attend the Ontario College of Art; she was only the second Newfoundlander to enroll.

At OCA, Parsons Shepherd met fellow student Reginald Shepherd, whom she would marry. Upon graduation, the couple returned to Newfoundland, determined to survive as artists in a province without an established milieu. Despite the risks, they purchased a three-story Victorian house, renovating the lower two floors into the structure that opened in 1949 as the Newfoundland Academy of Art, the province’s first art school. “We had nothing to lose,” Parsons Shepherd asserted in the face of the challenges before them.

Indeed, they gained a great deal. From an enrollment of 21, the school soon expanded to 120 students, aged 8 to 80. Parsons Shepherd taught classes at the school, as well as at four local convents. For eleven years, the academy emboldened the development of the city’s creative community.

However, thanks to the limited financial support offered for art education in Newfoundland, the academy struggled to hire and keep teachers. In 1961, the academy closed. Parsons Shepherd and her husband decided to focus solely on their own art, which had been neglected under the demands of operating their school.

Although Parsons Shepherd is remembered for her remarkable still life paintings and her images of Newfoundland street scenes, she earned a successful livelihood as a portraitist, commissioned to paint so many elite public figures—including Prince Philip in 1976—that she became informally celebrated as St. John’s “Court Painter.” Working from photographs and using notes taken during hour-long conversations with her subjects (who provided locks of hair to ensure Parsons Shepherd’s colour matches), her portraits captured a person’s distinguishing energy. Her biographer Ronald Rompkey remarked, “As a portraitist, she understood the person. She didn’t just paint a picture, she would bring something out.”

Parsons Shepherd remained an artist her entire life, committed to creative exploration till the end. She was an artist with a singular passion, breaking down the barriers of Newfoundland conventions so successfully that her once reluctant father eventually celebrated her paintings in much of his later poetry.