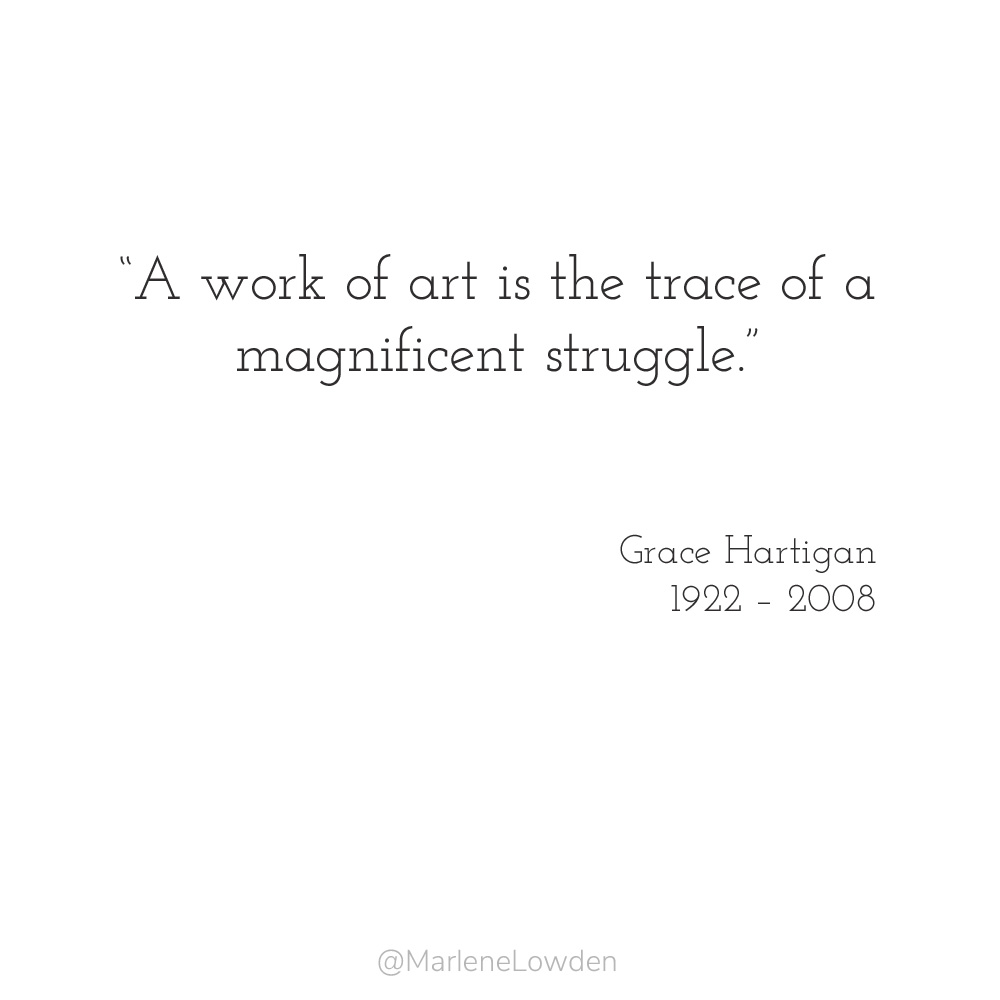 Hartigan was born in Newark, New Jersey, in 1922. Her interest in art didn’t begin until she was in her early 20’s. At 17 she fled New Jersey with her first husband Robert Jachens. The couple were headed to Alaska to homestead but turned around when they ran out of money and Hartigan discovered she was pregnant. Jachens was drafted in WWII and Hartigan lived with his parents, raising their son, Jeffrey. She worked as a mechanical draughtsman during the war. She escaped her dreary life by immersing into the world of art through books. She began taking art classes after being introduced to the work of Matisse, sparking a lifelong interest in modern art.

In 1945, she separated from her husband and moved to the Lower East Side of Manhattan to paint. Hartigan quickly became part of the inner circle of the Abstract Expressionists after meeting Rothko and Gottlieb.

At this time, she signed her work as George Hartigan, in honour of the 19th century women writers Georges Sand and George Eliot. She married twice in the 1940’s and both relationships ended because of the attention her work was receiving in the art world. She struggled financially and took odd jobs to support herself. In January 1948, after seeing a Jackson Pollock exhibition at the Betty Parsons Gallery, a new passion and perspective was ignited in her work.

Hartigan pursued this new energy and spent a week with Pollock and his wife, artist Lee Krasner, at their home in the Hamptons. Pollock encouraged Hartigan to look at the work of Willem de Kooning. In particular, she appreciated de Kooning’s study of the Old Masters and how he was breaking barriers between representation and abstract. Soon after, Hartigan began inserting recognizable images into her abstract paintings, which often consisted of thick, complex geometric shapes.

This new perspective earned her a solo debut at New York’s Tibor de Nagy Gallery in 1951. The following year she spent making studies based on Old Master paintings and she began to incorporate more recognizable imagery from her daily life into her work. These changes isolated her from her Abstract Expressionist friends, such as Joan Mitchell, and she lost the support from critic Clement Greenberg, which devastated Hartigan.

Hartigan painted intensely coloured gestural figures, inspired by coloring books, film, canonical painting, advertising, and life around her. The infamous painting “Marilyn,” which scatters facial features such as oversized lips and sparkling teeth across the canvas, was a breakthrough for her. Breaking up Monroe’s face was new and exciting for the time, while also challenging the standard for beauty.

Hartigan’s paintings were shown in ‘12 Americans’ at the Museum of Modern Art, New York in 1956, and in ‘The New American Painting,’ which traveled to eight European cities from 1958 to 1959. She was one of few women painters to receive that level of exposure at the time. Hartigan was hailed by Life magazine as one of the best young female American painters.

In 1960, she married her fourth husband, Winston Price, a collector of modern art and an epidemiologist at Johns Hopkins University. She moved with him to Baltimore and began teaching in the MFA program at Maryland Institute College of Art in 1965 and became director of the Hoffberger School of Painting. Her husband died in 1981 after an adverse reaction to a vaccine. She gave up drinking in 1983, after a failed attempt at suicide and lived until she was 86 years old.

She was a professor for 42 years and continued to paint until her death. She is well respected not only for her work but for her perseverance despite ofttimes heavy criticism.

Her distinct style has caused critics and historians to call Grace Hartigan both an Abstract Expressionist painter and a pioneer of Pop art. She was not happy however with either categorization because she believed that paintings must have content and emotion.  She has also been an admired pioneer of feminist art but disliked her paintings being judged according to gender.